Kiwanian Dennis Roark introduced our Speaker, Wittenberg Football Coach Joe Fincham.  Joe Fincham has been the Wittenberg Footbal Coach since 1996 having been the Offensive Line Coach for Wittenberg from 1991 to 1995.  He has coached 11 All American football payers at Wittenberg incuding Xan Smith, son of Lynda and Nelson Ted Smith selected in 1997.  He is the winningest coach with a record of 217 wins and 48 losses ror an 82% winning record.  Joe is from Williamstown West Virginia who played as a 4 year letterman at Ohio University gratuating in 1988 as a Captain of the team.
Under Coach Fincham’s leadership the Tigers have attained 15 NCAC Tites and participated in 13 Division Tournaments.  He has been selected the Ohio Coach of the Year in 2007 while also being selected as NCAC Coach of the Year 10 years.  He was awarded a Kiwanis Coffee Mug.  Joe is married to Rita and they have three children, Mack, Annie and Samantha attending public schools. 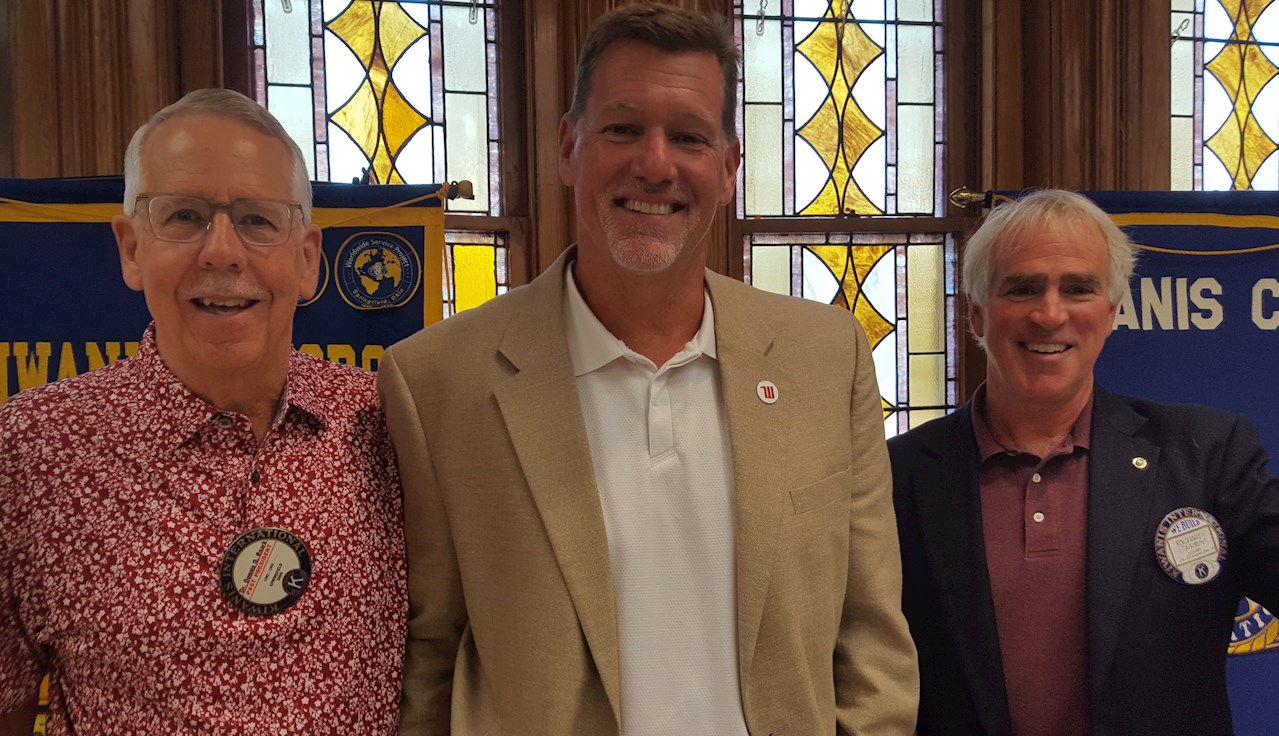 Wittenberg  Football Coach explained that when he became the head Coach, previous Doug Neibuhr left him two envelopes on his desk.  When Joe asked what these were for, Neibuhr told him to open the first letter upon his first loss to an opponent as encouragement to continue.  This second letter was to be opened when he suffered a terrible loss for the season and suggested that he could consider writing a letter of resignation.  Thankfully Joe has not had to write a letter about being replaced.

The editor actually missed the first part of His discussion, so is unsure of the exact comments above.  Joe talked about a new Kicker for this year in Ethan Hawke who promises to fulfill this important position.  He discussed the first game against SUNY Cortland which is the type of team that usually is a contender in winning their League in the Conference so there was no surprise that Wittenberg suffered a loss.  He stated that The Wittenberg team willl probably be able to stage a comeback win if necessary in the future.

Joe then talked about the schedule for the Conference:  September 18 at 4:30 they will play Hiram at home.  The second game will be at Denison or a 7 PM game at their field and Wittenberg has split with them the past four years.  Denison is somewhat implored so this may be a struggle for Wittenberg.  October 2nd we are again away at Ohio Wesleyan University which is a traditional rival which may be some advantage for OWU. for 2 PM game.  On October 9th De Pawl for the Homecoming comes to town for a 2 PM game and they are often a struggle for Wittenberg.  On October 16 Wittenberg goes to Oberlin for a 2 PM matchup.  On October 23 we welcome Ken  you to Springfield for an evening game at 6 PM.  On October 30 we travel to Allegheny in Pennsylvania for a 1 PM matchup and they are leaving the NCAC for a Pennsylvania Conference.  We remember a game when Xan was playing when we saw a water truck leaving the fied that we felt was spraying the dirt track.  Instead they were watering the 3 inch high grass on the football field to create a slippery playing field  This team creates a rish for a win for Wittenberg.  The next game is at Wabash which is usually a tough game for Wittenberg at 1 PM.  The last game for the Tigers is a home game against Wooster at 1 PM.  Wooster is always a threat to Wittenberg but has not been impoved for several years.

Coach mentioned that this is his fourth year of hiring managers that are daughters of former payers as this year he has Bailey Smith, daughter of Xan Smith working for the Tigers.  He mentioned that life is tough as in the book about Hillybillly Elegy described in The Road Less Traveled.. He opined that life is 10% what happens to you and 90% of what you do with what life gives you.

In answering questions about Newspaper coverage Joe stated their realy has not been much about the Tigers since Dave Samosky was a writer for the local paper.  Since the Paper is printed in Indianapolis and the move of reporters to the Dayton area, it seems Wittenberg is in the background as far as local reporting.  He reported that Recruiting can be difficult in trying to locate students who want to play for Division III that are also a good fit for Wittenberg because of a ack of Scholarship money.  He was asked about Financial Aid and stated that this is very complicated with much competition from other Universities.

Questioned about Vaccinations, he stated that approximately 80% of team members are competed with others getting the shots.  Members know that this is recommended during Welcome Week but is still not mandated.  Joe strives to keep the payers engaged in various activates but this sometimes is difficult.   Work sessions sometimes cause the players to drop out however most do wish to graduate with their class and they come back to play when possible.  He talked about a traffic accident where a player is coming back this year.  He also stated that all Universities have experienced problems with financial problems.