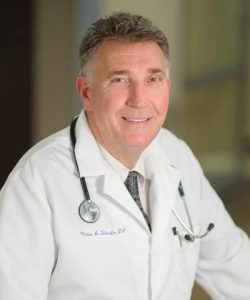 Marysville, Ohio – Memorial Health announced today the forthcoming retirement of the health system’s Chief Medical Officer, marking the end of a 43-year patient-focused career in healthcare for Victor A. Trianfo, Jr., D.O.  After 21 years with the organization, Trianfo will retire at the end of 2020. A celebration event will be planned in his honor, closer to the end of the year, based on current mass gathering guidelines.

“Memorial Health and our region will forever feel the positive impact of Dr. Trianfo and his service and dedication to medicine, the advancement of healthcare quality, and ultimately the care of our valued patients,” shares Chip Hubbs, CEO & President for Memorial Health. “Dr. Trianfo has been an esteemed administrator and leader for Memorial and a shining example of veracity and collaboration to those within our area. On behalf of our team and the community, I extend our appreciation and gratitude.”

During his tenure as CMO, Trianfo has been key in formulating strategic service line partnerships with renowned organizations, including The Heart Partnership with The Ohio State University Wexner Medical Center. This partnership has brought state-of-the-art cardiac prevention, diagnostic, and treatment programs, alongside expert physicians, for the delivery of comprehensive cardiac care to the people in Union County.

Hubbs noted, “In addition, Dr. Trianfo has played an integral role on the Memorial 2020 Committee, a team of hospital and community leaders who championed the $4 million philanthropic campaign. It seems fitting that Memorial will close out the year after opening the new Inpatient and Outpatient Pavilions, marking the genesis of a new era in healthcare for the community, while celebrating the close of the career of a doctor who embodies the tenants of leadership, dedication, and advocacy.”

Joining the staff at Memorial Hospital in 1999, Trianfo has served the organization in many capacities, including Emergency Department Physician, Assistant Director of Emergency Medicine, Hospitalist Director, Vice President of the Medical Staff, and Physician Quality Liaison.

In 2010, he joined the Administrative team as Vice President of Medical Affairs and Quality where he championed the organization’s efforts, attainment, and recognition as a high quality facility.  He was appointed the Chief Medical Officer in 2013. As CMO, his areas of responsibilities have included Medical Staff, Nursing Services, Risk Management, Quality/Case Management, Home Health, Respiratory Therapy, the Cardiovascular Lab, Patient Experience, and Philanthropy.

Hubbs adds, “Dr. Trianfo’s passion for serving others shines through his involvement both inside and outside the hospital. Affectionately called ‘Dr. T’ by our team and community members alike, he is more than the organization’s top medical officer. He has been a key thought leader and one of Memorial’s biggest champions for progress.  Add to that, one of my cherished friends and confidantes – Memorial will greatly miss our widely admired Dr. T.”

Locally, Trianfo has served on the Union County Foundation Board, Union County Chamber of Commerce Board of Directors, as well as actively continues to partner with the Union County Health Department, most notably through the COVID-19 pandemic and its impact on the local region. In addition, Trianfo also served as co-chair for the Central Ohio Quality Collaborative for the Ohio Hospital Association, helping Memorial Hospital and the healthcare community in general to focus on continuous quality improvements.

A true advocate for patients and a life-long learner, Trianfo began his love for medicine in scouting where his group’s focus was first aid and rescue activities. After completing the Emergency Medical Technology (EMT) program at Hocking Technical College, Trianfo worked as a paramedic in the field and was one of the first medics to serve in a hospital setting.  Always trying to advance his knowledge, he enrolled in the LPN and the RN tracks, one of only two men in the program at the time.  After achieving his nursing degree, Trianfo rotated through a variety of nursing positions in Central Ohio – from travel nurse to flight and trauma nurse to prison nurse, in his quest to learn multiple perspectives. He taught classes as well to paramedic students, thriving on sharing his love and enthusiasm of the field.

After completing his undergraduate degree in Life Sciences from Otterbein College followed by a medical degree from Ohio University College of Osteopathic Medicine, Trianfo fulfilled his internship at Doctors Hospital of Columbus. Trianfo next served as chief resident of Family Medicine at The Ohio State University where he also was an Assistant Professor of Family Medicine and Residency Director. After becoming board certified in Family Practice, he completed his post-graduate studies, including Fellowship education at Michigan State University. Trianfo joined Memorial Hospital in 1999.

Trianfo and his wife, Susan, have three adult children. After retirement, he plans to travel, read, and continue his pursuit of knowledge in a variety of areas.