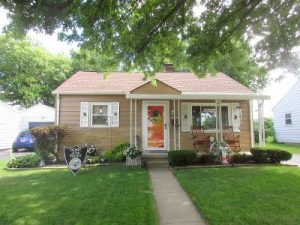 The CBC is conducting its 55th annual Home Beautification Contest this summer and twelve Home of the Week winners will be selected from those persons entered in the citywide contest.

Georgia has a beautiful, well kept home with colorful plantings around the entire  property. She received her first year CBC Shield Award in 2018 and will receive a
Numeral Award and a 2020 Home of the Week Award at the CBC Awards Presentation on Sunday, October 4th at 2 pm at the Courtyard by Marriott-Downtown Springfield.

Suggestions for the Home of the Week may be mailed to the CBC for consideration, however only entrants already in the contest are eligible. If the person suggested is not in the current contest,  their name will be held for automatic entry in the next contest.

To enter a business suggestion for beautification recognition, send a letter to CBC Contest, 76 East High Street, Springfield, Ohio 45502. Businesses along the periphery of the city will also be considered for special awards. Former CBC Home of the Year
recipients and 2019 Home of the Week winners are not eligible to be nominated for Home of the Week this summer.