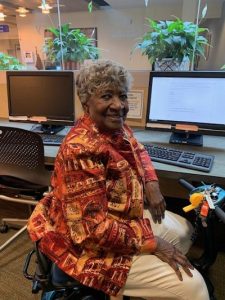 Springfield resident and retired nurse Novolla McClendon set out to prove her concerned family wrong when she enrolled in a Spanish class at Clark State Community College in the fall of 2019.

“Now my family says my mind is right, it’s normal,” says McClendon. “That’s why I decided to go to school; to prove to them that I was fine. I think I have. They were really interested in how I was coming along.”

The mother of 10 children, grandmother to 40 and both great and great-great-grandmother to more than 100, McClendon is not only a current Clark State student, but also an alumna.

McClendon went to Springfield High School at the time World War II started when many girls were getting married because the draft was beginning. She said, “My husband wanted to marry before he was deployed.”

McClendon married prior to the start of her senior year of high school. She later completed her GED and became a practical nurse (LPN) which then required only a 9th grade education.

Following graduation McClendon went on to work at Community Hospital – then known as City Hospital – in Springfield. Her nursing career also took her to the Dayton VA hospital, Grandview Hospital and Doctor’s Hospital in Columbus, but it was her stint at The Ohio State University Medical Center that motivated her to go back to college to become a registered nurse.

McClendon graduated in 1974 from then Clark Technical College with an associate degree in Register Nursing (RN); a few years later she went on to Meharry Medical College to graduate and become a pediatric nurse practitioner.

McClendon plans to again enroll at Clark State in 2022, with the hope that the threat of the COVID-19 virus has passed. Being proactive, she said next up on her class schedule is American Sign Language (ASL), because she is having some difficulty with her hearing.

“I have enjoyed my classes at Clark State so much,” she said. “My instructor Jennifer Savitscus is my VIP, my inspiration; they usually give five stars for that. I give her 10-plus stars for her patience, support and encouragement with me: her almost centenarian student. If there was a Spanish 3, I’d take that, too.”

McClendon said when she returns to Clark State, she hopes she feels as confident as she did taking Spanish classes. “Jennifer made me feel like I could learn anything. She always gave me things to practice and make it easier for me to learn.”

Instructor Jennifer Savitscus said “SeñoraNovolla McClendon” is an inspiration to her and she considers herself blessed to have known her in Spanish classes this past academic year.

“Novolla is an incredible role model to all for being a life-long learner, with a true passion for knowledge,” she said. “Additionally, she is a wealth of both community and historical knowledge. I valued hearing details about Novolla’s life growing up in Springfield, Ohio, while working as an RN for the VA hospital.”

Savitscus also says she admires the passion and love in McClendon’s eyes whenever she spoke of her family.

“In fact, I even learned a new Spanish vocabulary word through our teaching experience,” says Savitscus. “While covering a Spanish unit over the family, it became clear to me that Novolla would need to know the word for great-great grandchildren: tartaranietos. Señora McClendon is truly an exceptional woman, a superb scholar and a gift to everyone whose life she touches.”

McClendon also says she appreciates her classmates for being so patient and calm. “I love them all as if they were my own children,” she says. “All of the staff in the different departments and the bookstore were so patient, pleasant, helpful and encouraging to me when I asked for help.”

While the COVID-19 pandemic runs its course in modern history, the experienced nurse encourages everyone to continue their education, wear their masks and “listen to the caretakers.”

“At Clark State,students will be less stressed during the pandemic,” she says. “Students receive empathy and personal attention at Clark State. It felt like home. It feels like family.”