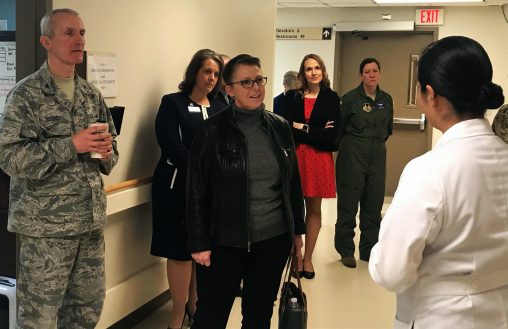 Wright State University President Susan Edwards visited Wright-Patterson Air Force Base to discuss the research, academic and vocational partnerships between the two institutions. Her tour included the Medical Center, where she spoke to several doctors.

When Wright State University began to sprout up more than 50 years ago right next to Wright-Patterson Air Force Base, it was a dream come true for Air Force planners starving for a nearby university.

Since then, Wright State and Wright-Patterson have become soulmates and close partners in everything from engineering and medicine to neuroscience and music.

The College of Engineering and Computer Science receives millions of dollars in funded research from Wright-Patterson, especially from the Air Force Research Laboratory.

The Wright State Boonshoft School of Medicine also has close ties with Wright-Patterson.

Many students at the USAF School of Aerospace Medicine earn their master’s degrees in public health at the Boonshoft School of Medicine and complete their training through the Wright State Family Medicine Residency.

In partnership with the 88th Medical Group at Wright-Patterson, the School of Medicine sponsors residencies in internal medicine, emergency medicine, pediatrics, obstetrics and gynecology, general surgery and psychiatry.

Forty percent of the 382 residents are active-duty Air Force officers who are trained in hospitals and clinics in the region and care for patients throughout the community.

Margaret Dunn, dean of the Boonshoft School of Medicine, said the Wright-Patterson Air Force Medical Center and the 88th Medical Group have been valued partners for the medical school’s entire 40-year history.

“Our integrated residency training programs have been replicated through military medicine,” said Dunn. “Our subsequently developed collaborations with other Air Force educational and research units, including the USAF School of Aerospace Medicine and the 711th Human Performance Wing, have advanced our individual missions and enhanced both our organizations.”

The Department of Neuroscience, Cell Biology and Physiology has education partnership agreements with the Air Force Research Laboratory and the Naval Medical Research Unit Two that provide opportunities for undergraduate and graduate students to work in these labs.

More than 700 alumni of the Raj Soin College of Business currently work at Wright-Patterson. The relationship between Wright State and Wright-Patterson’s recruiters of business administration professionals includes Air Force specific workshops, recruiting days and interviews, all conducted by base personnel at the college.

Students at the College of Business complete an average of five capstone projects at Wright-Patterson each year as a part of the master’s degree programs in Information Systems and Logistics and Supply Chain Management.

The college has also offered specialized workshops on business topics for the Air Force, the most recent one being the Seminar on Creativity, Innovation, Teamwork and Leadership at the Life Cycle Management Center in 2017. 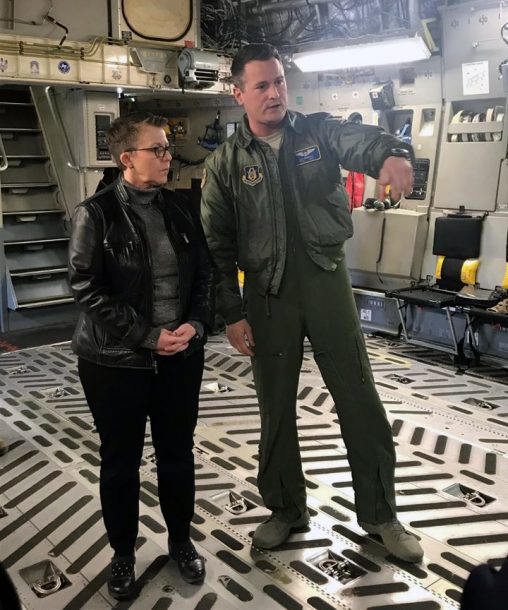 While visiting the 445th Airlift Wing President Susan Edwards received a briefing on the C-17 from Tech. Sgt. Jay Benedict.

About 200 graduates of the College of Liberal Arts are employed at the base. And the college has also placed interns at Wright-Patterson, including at the Air Force Institute of Technology, the National Museum of the United States Air Force, the Advanced Technical Intelligence Center, the International Affairs Office, the Defense Security Cooperation Agency and the Civil Engineering Group.

The college’s School of Public and International Affairs has multiple faculty who serve as regular guest instructors at the Defense Security Cooperation Studies University, which brings together Air Force personnel from around the world for high-level training in finance, management and foreign affairs as it pertains to security interests.

The college’s New Media Incubator works with the Air Force to help strengthen its connection with industry and create a small-business ecosystem.

Members of the Air Force Band of Flight frequently come to Wright State to give master classes and work with students in the School of Music.

The College of Nursing and Health offers cardiopulmonary resuscitation training to Wright-Patterson employees.

In October, Wright-Patterson employees who are graduates of the College of Liberal Arts took part in a career panel, giving students a peek at some of the many jobs available at the base and how to get them. And in February, Andre White from Wright-Patterson gave a campus talk on purchasing contract jobs as part of the Wright State Career Services Employer Speaker Series.

They also tried on compression shirts with wearable sensor technology that senses physiologic parameters in the Air Force Performance Wing’s exhibit. And the Air Force Research Lab demonstrated technology that converts video into speech for people who are blind or for surveillance purposes.

Additional news stories, media resources and media contacts can be found on the Wright State Newsroom or the Office of Communications website.